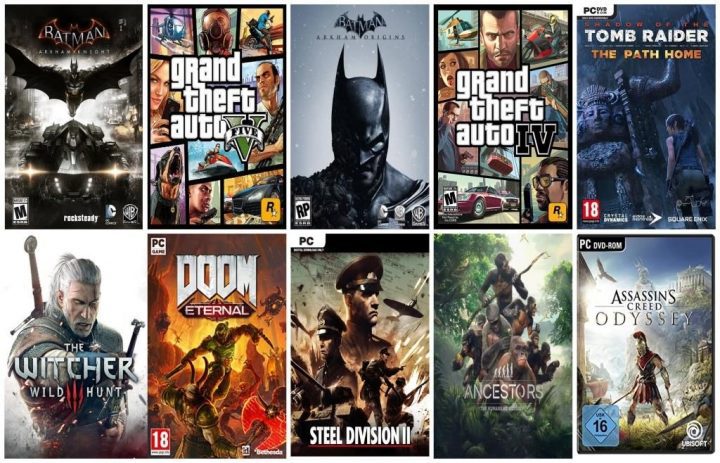 Over the past years, competition has intensified between computers and gaming platforms in order to provide a better environment for playing, and some platforms have sometimes monopolized certain games and made them exclusive to them, but despite that, the computer has remained a key player in the competition. We still have many distinctive computer games that deserve Spending hours on them no matter what style of gaming you prefer.

Even if some people laugh at computer games and do not prefer them, and despite the existence of a number of famous gaming platforms that can be considered an alternative in many cases, playing on the PC brings many a special pleasure, and irreplaceable pleasure sometimes, especially in some games. That includes the use of weapons.

We have been absent from you with our centenary lists for a long time, but here we are back, hoping that this article will be a means of reconciliation between us, and to return to our path of centenary articles that make it easier for you to choose among thousands of things, whatever they are, based on several elements, and the evaluations of many experts and specialists at the level of the scientist.

Our date today is the beginning of laying the foundation stone for the new centenary series of articles specialized in games, and we chose the beginning to be with the Godfather and the game-making tool, the PC platform, so follow us in the following lines.

Note that this list of the 12 best games I consider the best in history includes games that are still – in the first place – playable until this moment, even if they were produced more than 10 years ago, as you will see in the article.

One of the oldest and best experiences in the history of games in general and computer games in particular, the famous Grand Theft Auto series, known as GTA, came to us with its last parts in September of 2013. It is an open-world game developed by Rockstart North and published by Rockstar Games on the platforms, while I waited for 2015 until it was available for PC.

The development of this part began immediately after the launch of GTA IV, which is one of the best computer games. This game became one of the best computer games, the first part of the series, and one of the few, if not the only, games that have the ability to play in FPS mode or from a third-player perspective. As usual from the series, it gives you the freedom to walk or use vehicles. Players control three people in a single-player mode and switch between them during missions.

The game was a miraculous success in terms of sales, with sales of one billion dollars in the first three days, and it won many awards, including Game of the Year, from many sites and magazines.

The latest versions of the famous Assassin’s Creed game, which takes place in Egypt in the era of the Ptolemies, and during the wandering of the main character in the vast desert of Egypt and its ancient cities, the story requires the implementation of a series of assassinations for a number of Egyptian public figures on the political and social levels, which will lead to the formation of the image of the future of the kingdom Egypt, up to accumulations that affect the future of the modern world.

This game is the best game in history from the point of view of many experts, reviewers, sites and magazines specialising in games. The third instalment in The Witcher, the open-world RPG series developed by CD Projekt RED and first announced in 2013, was released in May 2015.

The game has won the Game of the Year award from many websites, magazines, critics, and many award conferences and events.

The story revolves around Geralt of Rivia, a monster hunter known for being a wizard.

The number of pre-booking times for the game reached 1.5 million copies, and it is one of the best computer games and ranked first in terms of sales in the British market in the first week, and the market income reached more than 600% over its predecessor.

Dark Souls is an RPG developed by FromSoftware and published by Namco Bandai Games for previous generation platforms. It is the second part of the Souls series. The development of Dark Souls began under the name Project Dark.

All reviews about the game were positive upon its release, and it was considered one of the best games. Reviewers praised the world design and fighting style of the game.

It is reported that the PC version came in second place as the most played Games for Windows Live game.

Another instalment in the Mass Effect series was also developed by BioWare and published by Electronic Arts. The second part of the series also takes place in the Milky Way during the twenty-second century. In it, the player takes on the role of Commander Shepard, a human soldier who is trying to defeat the enemy in a suicide mission.

The game was an overwhelming commercial success, garnering ratings of 96/100 and winning several awards including Game of the Year in the 14th annual Interactive Achievement Awards, and was also included in many lists of the best games in history.

The second part of Half-Life was no less successful than the first, on the contrary, the company did better. The game is developed and published by Valve Corporation and is the second part of the series, released in November of 2004.

The story of the game revolves around Gorden Freeman, who wakes up several years after Half-Life by G-Man to find that the world has been occupied by Aliens.

It is one of the best computer games. The game was praised for many aspects, including graphics, movement and sounds, and won 39 “Game of the Year” and “Game of the Decade” awards during the Spike Video Game Narrative Awards in 2012.

MGSV is an open-world stealth game developed by Kojima Production and published by Konami for all platforms in September of 2015.

The game takes place in the year 1984, nine years after Ground Zeroes.

The game has received a lot of positive reviews, especially as it gives the player a great deal of freedom of movement and possession of what surrounds him and uses it in battles.

Dishonored is a stealth game and one of the best games in this category developed by Arkane Studios and published by Bethesda Softworks. It was launched in October of 2012 for previous generation platforms and PC. It takes place in Dunwall.

The game is played from the perspective of the first party and the player carries out a number of assassinations in many different ways.

The game drew a group of positive reviews, and won several awards and was nominated for other awards in 2012 and 2013.

We previously mentioned in this article the second part of the Portal series, but the first part of this game is another matter.
Portal is, as we mentioned before, combining different categories, as it is a platform puzzle game from a first-party perspective. It was developed by Valve and released in a bundle called The Orange Box for PC and Xbox 360 in 2007.

This part received more than what the second part of the game received, as one of the best original games in 2007, although reviewers criticized the short duration of play and the definition of the story, it received positive reviews and praise, especially for being something new original, distinctive gameplay and a black story with sarcastic conversation.

Rocket League is a soccer game of its kind developed and published by Psyonix. It was initially released for PC and PS4 in July of 2015, followed by Xbox One and other PC systems in 2016.

The game is in the football category, yes, but it is not made by humans but by rocket cars.

The game received a lot of praise, sales of six million copies and the number of players of at least 18 million players around the world a year after its release, and it is one of the best computer games.

Another instalment in The Elder Scrolls V: Skyrim series comes to our list but this time in a very advanced rank.

The open-world RPG game was developed by Bethesda Game Studios in its fifth season, which was launched in November of 2011 and can be played on all platforms.

This part was made by the Creation Engine, which was made specifically for this game.

The game has received very high ratings from all sites and reviewers, not less than 9/10 or 90/100, and has won many awards, including RPG of the Year and Overall Game of the Year.

One of the best PC games Dota 2 is a free MOBA game developed and published by Valve Corporation. The game is a separate part of the Defense of the Ancients series, which was initially designed as a spin-off from Blizzard: Warcraft III: Reign of Chaos.

The game was released in July 2013 while its development started in 2009.

The game received a lot of positive reviews, won an IGN People’s Choice Award, and was named to the PC Gamer’s Best Game of the Year list as well as eSports.

Final words: These games are really the best?

With this, we have provided you with the 12 best games in history (based on my opinion of course) that were made for the PC with Windows, Linux and OS X systems. Of course, this list may be devoid of computer games that you may think are worth being in more than other games, and they may contain games -in your opinion- It is not worth being in it, but it is only relative, there are thousands of games that have been made throughout history, and there are millions of players, and if our opinions do not differ, copies of these games will not be sold.

Only we tried to limit what is best from our humble opinion, which is subject to error and right, and the rest comes to you, so it is your turn now to share with us your opinions in the comments on what you think is worth being present, and your opinions on what is already on our list, and wait for us in more lists.